The scene was eventually set for the 2017 County Intermediate Final on Saturday last in Pearse Stadium as Claregalway and Williamstown locked horns for the right to play senior ball in 2018. After petty actions of Aran Islands outfit, perhaps the game was overshadowed by words and phrases such as “appeal” & “toys out of the pram”, alas the two teams who showed up on the day were both deserving and warranted their positions in the final. 4 years on from their last visit to a decider, Claregalway were certainly motivated to right some of the wrongs of an underwhelming performance (and bizarre management decisions) in 2013 with 7 of that starting team returning to the field for Saturday’s game whereas opponents Williamstown were appearing in their first Intermediate finale.

Claregalway won the toss and elected to play with what has to be said was a strong wind for the first half, and ultimately it proved to be vital. We settled well and enjoyed some good early possession and with a few minutes played – despite the fact we were tied at 2 a piece, it had been a positive start with the 2 scores from Danny and the busy Rohan. From there on out it was all the Claregalway men as we owned the remainder of the half with plenty of damage done particularly in the closing 10 minutes. We hit 1-07 without reply with the goal coming from Conor Kelly and scores from Rohan, Sean, Conor Campbell, Barry Goldrick and Eoghan Commins leaving us in a healthy position at the break. All over the field we had solid performances and with Hennessy at midfield, Sean and Rohan up front, the Williamstown big support had been drowned out by slick movement and slicker shooting as we led 1-09 to 0-02 when Noel Dempsey blew his half time whistle.

I have always hated the adage of a game of 2 halves and while I always tried to avoid its use, it would be impossible to report on Saturday’s game without it. Williamstown now with the wind at their backs returned to the field knowing a quick start was definitely needed. It wasn’t to be as Barry Goldrick started and finished a wonderful team move to push our lead out to 11 points. To borrow a phrase from the sweet science, Williamstown now resembled a punch drunk boxer on the ropes waiting for the final blow to end the contest. It nearly came as Conor Kelly passed to Barry who fed in Rohan, who blasted at Williamstown custodian Gary Silke who saved smartly as the men in maroon and white clung on. It proved to be the catalyst needed for Baile Liam as they hit the next 3 points on the spin from sharpshooter Gary Kelly. Sean Moran eventually stopped the rot with an outrageous free from near the sideline however it would be our last score for 22 minutes as the onslaught began. Tactical naivety from Kilgannon was illustrated when Claregalway abandoned the ploy of pushing up on the Williamstown kickout which had served them so well in the first period with Hennessy in particular winning primary possession. As a result, we lost the momentum and with Gary Kelly, Thomas Comer and captain Kieran Flately kicking some great scores – you better believe the momentum had swung and the Williamstown fans found their voices and the lead was eventually whittled down to 2 points with less than 5 minutes left on the clock. This was as good as it got for the Baile Liam men as their urgency to chase the lead led to an error which afforded Conor Kelly the chance to take the lead which he took full advantage of to push the lead back out to 3 points and afford a big sigh of relief to all those the men in green and gold.

The whistle finally sounded and the final score read Claregalway 1-12 Williamstown 0-12 and it was the Claregalway men who will return to Senior championship for 2018 as it was the turn of Peter Divilly to follow in the footsteps of Pat Stephens 15 years ago to collect the cup on behalf of Claregalway with Sean Moran deservedly picking up the MOTM award. I heard an interview with Williamstown manager Sean Keaveney in the aftermath of the game and while there was total devastation in his voice, he has reasons to be positive as this Williamstown team can come again and senior football is well within their grasp. As for Claregalway, the work of a dedicated panel of players, Kilgannon, Fergie, Anthony Watson, Alan Moran, Chief, Jackie and Padraig Fitzmaurice eventually paid dividends.

Somewhat subdued celebrations followed on Saturday night as the team prepared for a big day out in Sligo the following day in a Connacht Semi Final v St. Johns. Kilgannon reportedly left the champagne on ice instead opting for a late night cheese board and a zesty chutney as there was 1 more job to do – Report to follow !
Emmet Feeney 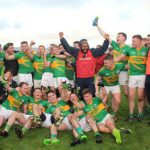 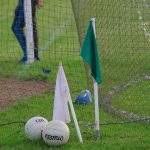