In Memory of Patsy O’Hagan: All-Ireland Footballer and Community Leader

March 21 2020 marked the Tenth Anniversary of the death of Patsy O’Hagan, star footballer with his native Co. Down All-Ireland winning teams of 1960 & 1961 and whose legacy in the development of Claregalway GAA Club in its earlier years we commemorate at this time.

The 1960 Down team was the first team from Northern Ireland to bring the Sam Maguire Cup across the border. Patsy won two All-Ireland medals, playing at full forward against Kerry in 1960 and at wing back in the win against Offaly in 1961, 3-6 to 2-8. The 1961 Final was famed, firstly, for the massive crowd of 90,556, an all-time Croke Park record and, secondly, by an explosive start with Offaly scoring two goals early on. True to form, Down responded and bagged their three goals during their first-half scoring tally. Patsy won three National Football League medals, five Railway Cups and seven Ulster Cups, leading his team out as captain in1966. He was selected for the first Ireland team which took on Australia in International Rules in1967. He was a selector for the Down team that won the 1968 All-Ireland title.

In 1968 Patsy moved to Galway, joined the construction business James Farragher Construction in Tuam and played with Tuam Stars. He moved with his family to Claregalway in 1970.
In Claregalway, his legacy is reflected in his work for the delivery of community sports facilities. In the Club’s early years of the 1970s, a football pitch and a settled home for the Club were foremost requirements. Helped by the Club officers of the day, Patsy led the push for the acquisition of land. An extensive fund raising campaign was launched, including door-to-door requests for financial donations. Eventually in 1978, 7½ acres of land in Lakeview were purchased from Martin Boyle of Cregboy; the ground was soon laid out and ready for match fixtures.
At the same time the Club set about providing indoor facilities onsite. Continued fund raising combined with a government grant enabled the Club to build a Sports Hall, completed in 1980 and now known as the Leisure Centre.

Also in the 1970s, athletics had featured strongly in local recreation and Patsy had a central role as Secretary of the Community Games organising committee. The new playing grounds soon became a widely acclaimed venue for the Claregalway/Lackagh Community Games, an annual mecca for the enjoyment, thrills and spills of 100s of youngsters, boys and girls.
Patsy was later elected Honorary President of Claregalway Football Club.

Within the Club’s ever busy calendar of events, the week-end of March 30–April 1 2012 was notable for its own special significance. Claregalway Football Club, together with Carnmore Hurling Club, was honoured to host Patsy’s native Down Club, Clonduff, for a visit to Claregalway to celebrate their 125 th. Anniversary. Clonduff’s Ladies and Mens teams and their Club Officers all travelled in big numbers for a packed week-end of football and hurling matches played off in Carnmore and Claregalway. The O’Hagan Family donated the Patsy O’Hagan Memorial Cup for the winners of the Claregalway v Clonduff match. On the Saturday night, the newly opened Arches Hotel was the venue for great celebrations where Clonduff presented our Club with a beautiful replica of a football made from granite rock; it is currently on display in Knockdoemore.

Patsy was predeceased by his wife Kay in 2008 and is survived by his sons Brendan, Michael, P.J., John and daughters Dympna and Mairead. His grandson Danny is a member of the Co. Galway Senior Football panel.

Some photos below – please click on an image to enlarge it. 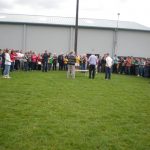 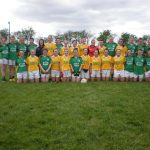 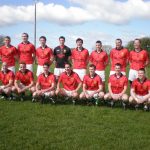 Claregalway played in the Down Colours 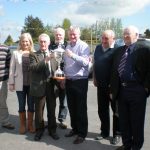 Eddie and Brendan O’Hagan holding the Patsy O’Hagan Memorial Cup donated by the O’Hagan Family, Claregalway, for the winners of the Claregalway v Clonduff game. 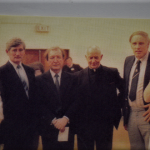 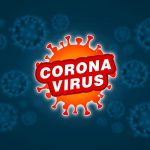 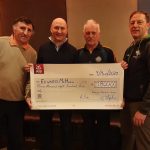