The AGM of Claregalway LGFA will be held on 19th November 2018 and all are encouraged to attend.
The current board are being proposed to remain in place for another year. However, applications are most welcome and open for each position, nominations forms can be got from club secretary Lorna McNicholas on lornamcnicholas@gmail.com and will also be distributed with this AGM notification. Signed Nomination forms need to be returned to club secretary by 16th November 2018
Agenda
Minutes of AGM 2018
Matters Arising
Chairperson Address
Secretary report
Treasurer report
Managers’ report
Nomination & Ratification of Officers & Managers
Motions
AOB 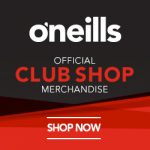