Our first Senior League game took place on the 16th of March 2003 at 14:00 in Lakeview against Carna-Cashel. We were managed by Roddy Grealish.

Carna-Cashel were newly promoted and also for the first time in their history themselves. They had won the Intermediate league the year before, and we had won the championship. Back in those days relegation was through the league. Two of the ten teams in the Senor B league were heading back down to Intermediate. For the majority of teams in Senior B, many of whom were in the division for years, the nine league games were very important and the four or five home games of those nine were extremely important. So for the likes of ourselves and Carna-Cashel, league games like this one were relegation four pointers, even that early in the season.

For us in particular the game was crucial. It was the first of our five home league games that year and we knew if we werent picking up two points there we were in serious trouble already. Add to that the novelty of our first Senior game and it made for a big crowd and a great occasion in Lakeview. The game also began a pattern that would continue over the next nine years – Lakeview became a fortress of sorts, those home league games were our championship games, and we became very hard to beat there.

The clubs first Senior Championship game was to take place against Kilkerrin/Clonbern later that year.

A final point worth noting, Carna-Cashel were a remarkable team and in 2003 were also enjoying the first taste of Senior football in their history. Our paths crossed with them regularly in our earliest few years in the senior ranks and they had their revenge over us later in 2003 when they knocked us out of the Championship in a back-door qualifier game in Pearse Stadium by a single point.
In all we played them five times in our first three years at senior level – twice in Championship where we lost to them both times, and three times in the league, where I believe our only victory was that historic day in Lakeview. In 2005 Carna-Cashel made it all the way to the County Final before succumbing to a powerful Salthill team that went on to wn the All Ireland Club title the following March. Unfortunately for Carna-Cashel, and within a matter of weeks of that County Final appearance, they found themselves relegated back to Intermediate football having failed to avoid finishing in the bottom two of the Senior B league. The all-importance of the league in those days was never more cruelly demonstrated.

Here is the match report from that day (written by Sean Flanagan) and published in the Tuam Herald on the 19/03/2003:

Seniors heralded a new era for the club by winning their first competitive game in this grade when they defeated Carna-Cashel in the county League by 1-12 to 0-12 at Claregalway on Sunday.

A large enthusiastic support turned up for this historic match played in perfect conditions and saw the home side dominate for most of the hour.

After Claregalway went ahead early on they maintained a lead of 5 to 6 points for most of the hour until Carna-Cashel closed their account with two points from frees near the end. Martin Kellys’ four long range points off tees and from play were a feature of the game.

Early on it was all Claregalway with a good goal by Anthony Monaghan, set up by Enda O’Connell; a brace of points each by Enda O’Connell and Brian Day, and in between a point each from Paul Higgins, Kevin McNamara and Martin Kelly. Carna-Cashel opened their scoring with a pointed free on 17 minutes followed by three points in the last five minutes of the half, two from frees. Martin Kelly pointed a free for Claregalway on the stroke of half-time to leave the score at the interval 1-8 to 0-4. Much of Claregalways’ dominance stemmed from their half-back line and mid-field, Francis Forde in particular, John Paul O’Connell and Barry Cullinane. Carna-Cashel came more into the game as the second half progressed. Although they scored six points, Claregalway replied with points by Enda O’Connell, Kevin McNamara and two soaring efforts by Martin Kelly (one from a free). These scores left them ahead by 1-12 to 0-10 with ten minutes remaining. Brian Donoghue brought off a fine save to keep Claregalway on top to the end, even though Carna-Cashel narrowed the deficit with those converted frees. 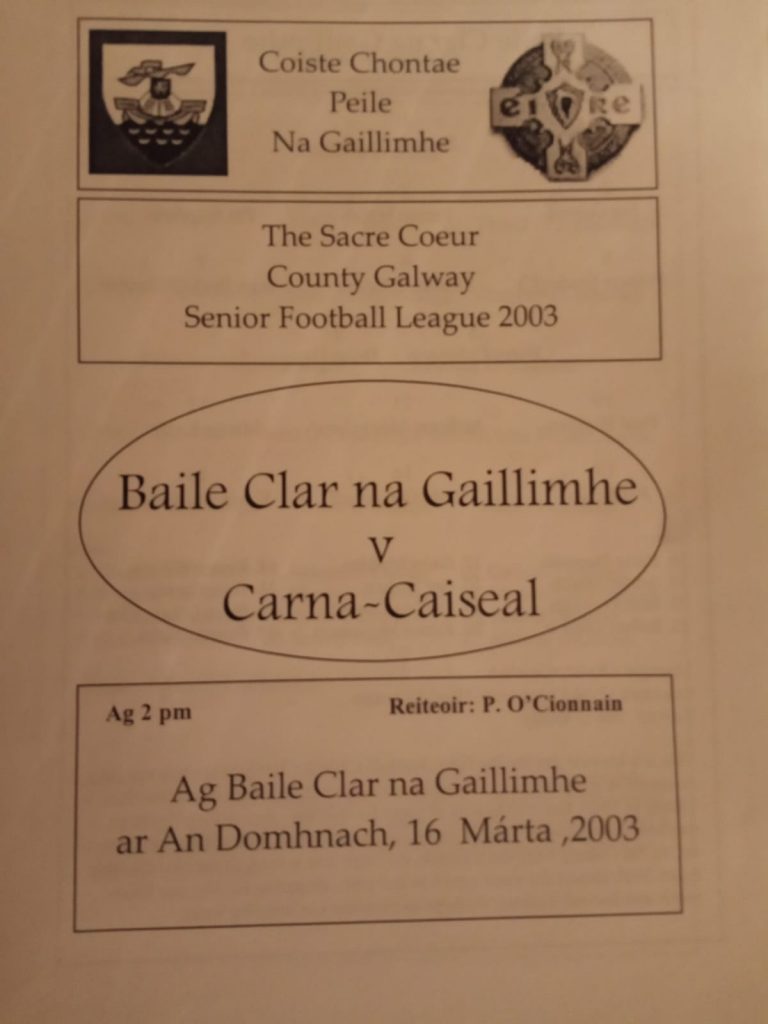 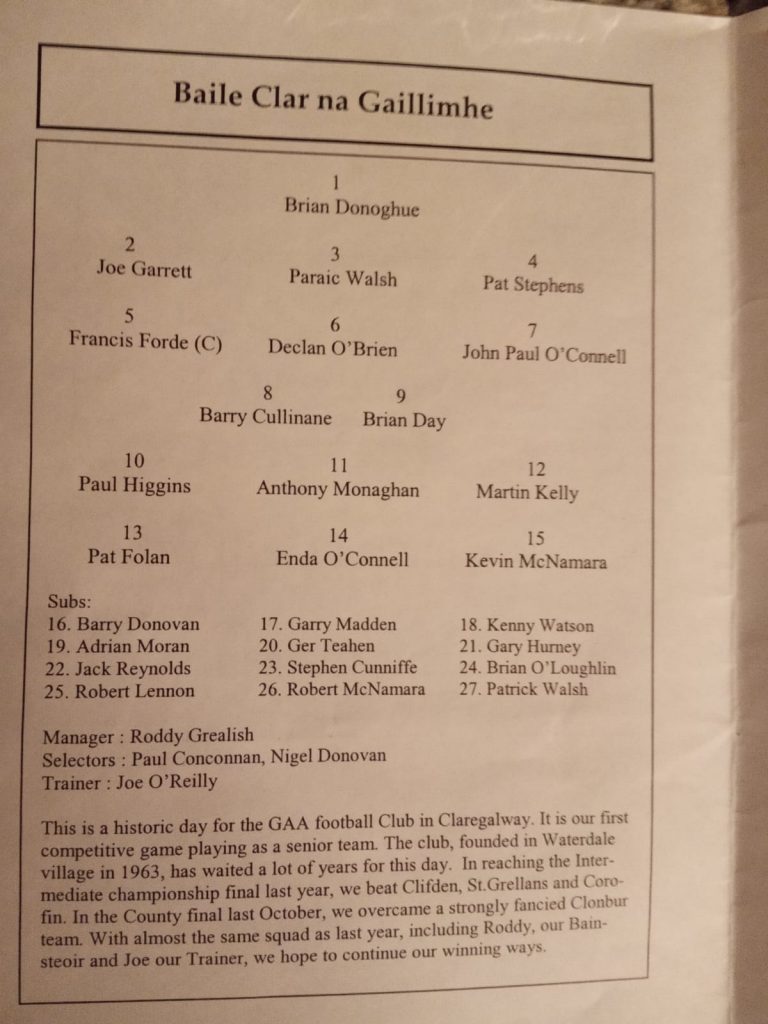