7
0
Claregalway 0-10 Killannin 0-11
Senior Championship 2020 Group 3 Rd 1
Pearse Stadium 31/07/2020
Claregalway were left heartbroken when Killannin dead ball specialist Enda Kelly held his nerve to kick his side into the lead in the 4th minute of injury and resign Alan Moran and his charges to a 1 point loss in this year’s opening round of the senior championship. Despite only leading on 1 occasion in the game, Claregalway would ultimately head for home with many regrets as missed chances proved costly in a game which went down to the wire and did not lack for bite. Lorcan Molloy put Claregalway into the lead inside 2 minutes from an attacking mark but for the most part we trailed and late scores from the men in blue and white had the half time scoring reading Claregalway 0-05 Killannin 0-07. Claregalways white flags registered courtesy of Barry Goldrick and Mark Rohan. Paddy Sweeney’s physicality did cause Claregalway issues throughout and while he did finish with 4 points, the deployment of Conor Campbell into the full back line to curtail him did reap some rewards and negate his influence. Killannin started the 2nd half sprightly and took further control of proceedings however, Claregalways purple patch soon began and a 4 point deficit was eradicated with Goldrick, Rohan and Jack Glynn kicking scores. By now, Claregalway appeared to have a monopoly on the middle third and had our opponents unable to exit their own half. Ultimately it wasn’t to be as Claregalways pressure couldn’t yield the score needed to put us in front and it was left to Kelly to convert his free and secure a precious 2 points for his side. Claregalway were best served by Conor Campbell, Jack Glynn & Barry Goldrick while the introduction of Matthew Kilgannon provided some much needed stability at the rear while Jason O’Reilly provided some electricity to the forward line.
Claregalway now face Caherlistrane on Sunday August 16th in what is a must win game.
In the immediate aftermath, the club and community were deeply saddened to learn of the tragic passing of Enda Flaherty which put the overall result of a game of football massively into context. A friend of many and a foe of none, Endas presence will be greatly missed and all thoughts and prayers continue to be with the Flaherty family throughout this difficult time. 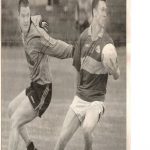