Claregalway GAA Club is a thriving GAA club with members from many walks of life, from the very young to the very old, whose reach extends into every part of the community.

The club was 50 years old in 2018 and grows from strength to strength in membership, facilities and on field success.

Both our mens’ team and ladies team compete in Galway Senior competitions.

The Juvenile section of the club has between 900 and 1000 kids playing at various levels. It is the biggest Juvenile club in Galway and the second biggest in Connacht.

The Club was founded in 1964 and a very committed group of community leaders purchased its first grounds of 7.5 acres in Lakeview in 1978 through major fundraising efforts, contributions and the generosity of the Boyle family who make the land available. The vision and leadership of this group of people put the club in a very good position to grow and adjust to the needs of rapidly increasing population.

In 2009 a further 20 acres of land were purchased in Knockdoemore. At the time this was a significant project in itself but what has happened in Knockdoemore over the past decade is a testament to the can-do attitude that continues within the club and the members of the club who have supported the development since then. 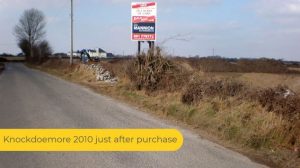 In total almost 2 million euro has been invested on the Knockdoemore facility to bring it to where it is today. This was achieved through grant aid, generous sponsor contributions, volunteers and multiple fundraising activities within the club. 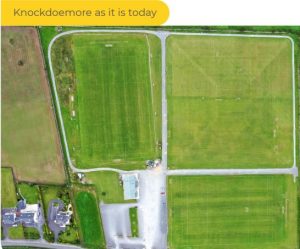 The next phase of development is the upgrading of the Lakeview grounds to an all-weather facility.

A number of delays have so far held up the project however we are now in a position where we need to row in behind the project with whatever support we can give.

To qualify for the 60 percent grant the club has to provide and show its own funding of €250K in addition to planned loan arrangements.

We need to show that we have these funds (€250K) and we need to have these in place before the 1st of September 2021.

Why a 5G astro in Lakeview?

The plan for Lakeview is very much reflective of our member’s thoughts which have been gathered through many face to face individual meetings and numerous discussions at committee level since 2018. 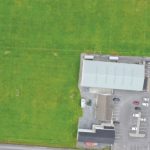 The clubs’ growth over the past decade as well as the ambition of its’ members into the future mean that we need an all weather facility that can hold up under regular use throughout the year, particularly in Winter months.

As our younger teams move up through the age grades more training throughout the winter months will be required and the pitches in Knockdoemore won’t hold up to the weather and increased usage.

Lakeview is where the club started and is now at the heart of the community nestled between a number of national schools and Coláiste Bhaile Chláir. Coláiste Bhaile Chláir have outlined their intention to continue to use Lakeview for their own training requirements at times that are “off-peak” for the club.

Furthermore the Astro forms part of a bigger plan for Lakeview.

Planning has been approved for a 5G pitch, a Playground and a walkway. A planning application has also been submitted to extend the existing community centre. Lakeview can be a community hub for years to come, a facility that young and old can enjoy. The 5G astro pitch is the first step in this vision.

The club can avail of a €580,000 grant to develop a 5G pitch in Lakeview. This is a unique opportunity to gain sixty percent funding for a major upgrade to our facilities. This level of grant funding is not achievable for work in Knockdoemore. 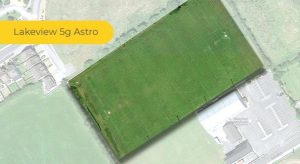 One could say that this plan is ambitious but without ambition one starts nothing.

Our future is undoubtedly in our own hands. With hard work, co-operation, member’s support and a sense of shared leadership, we can move our club to another level both on and off the field. We simply should not settle

for anything less than what is required for our membership and the Claregalway community in general. Those who have gone before us in our club have given us every opportunity to thrive; we now must do the same for the generations who will come after us.

Knockdoemore took vision and a level of controlled bravery from those who started and continue to maintain the project, just as Lakeview originally did over 40 years ago. Now the requirement is to modernise our facilities in Lakeview. 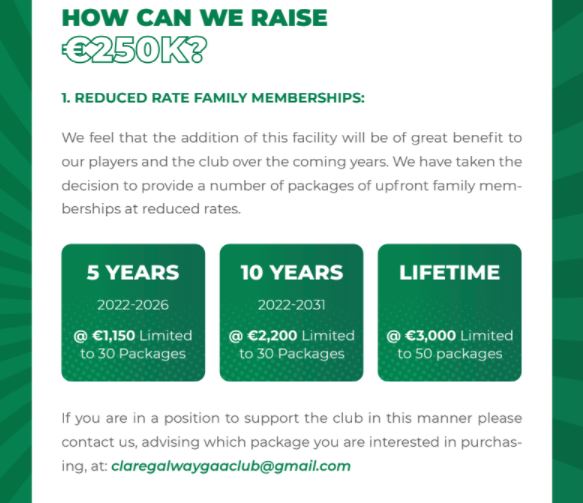 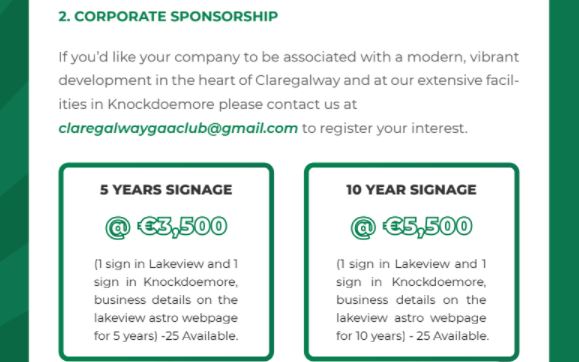 If you  wish to offer your support in any other way to the project please contact: claregalwaygaaclub@gmail.com for more information