The AGM of the Claregalway Ladies GAA Committee which was held on Monday 27th November in Knockdoemore was well attended. Chairman Tony King welcomed all to the Meeting. Reports were presented to the Meeting from the Officers and all Managers.

Again, 2017 was a very successful year for the Club, Some of the highlights from the Managers were a big increase in numbers involved in the U8/10’s age group both players and Coaches, U-12’s despite a slow start to the Season finished the year very strong to retain the A Championship and also Fielded a very impressive Three Teams for Championship. The U-14’s won all 3 County Titles as well as the All-Ireland Sevens. Sixteens won the Championship Shield and the second U-16 Team won their League.

At Minor level the Mairead Meehan Shield was retained while the Juniors took the County Junior B Title. At Senior level the highlights were the Comortas in Mayo where the Girls won the Senior Final and they also won their first Connaught Sevens, There was some disappointment not having made the Senior League or Championship Finals. One of the other highlights for the Club was the visit of the New York U-17 Ladies to the Club in August. Treasurer Maura Murphy presented a detailed balance sheet and expressed the need for more fundraising to be undertaking in 2018 in which all members need to be involved. Tributes were paid to the outgoing officers Tony King, Michael Downes and Babara Connolly who were stepping down from their roles after having served the Club very well for the past few years., 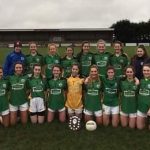